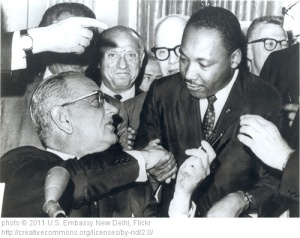 Today, I am continuing the “Why Pursue Racial Reconciliation?” conversation from last week’s Midday Connection appearance. The focus of today’s post is politics. Let me start by saying, “I hate politics, yet I understand and respect the importance of government.” I would prefer never to discuss politics on this blog or elsewhere for that matter, but since the topic keeps coming up in the racial reconciliation conversations, I feel we must at least address it here. If I simply ignored this issue, I would be doing exactly what I am encouraging my readers not to do. So I’m going to engage. Here it goes…

Full disclosure—so no one makes unmerited assumptions about my motives which distracts from this important conversation—I am an independent voter who has voted for both Republican and Democratic candidates.

When the issue of politics was raised again on the radio broadcast, I provided a response along the following lines: “Barack Obama is President of the United States of America and God is sovereign even over that.” Biblical truth to consider: Daniel 2:20-21; Prov 16:4, 33; Prov 21:1.

As President, therefore, he is worthy of our honor whether we, as Christians, agree with him or not (that’s the counsel some Christians would give wives concerning their husbands, and it’s the counsel we would give children concerning their parents). Of course some Christians will raise the question: What if the President is leading us outside the will of the Lord? While important, I’m not going to  write about the theology or Christian ethics behind civil disobedience today because that would distract from the focus of today’s conversation (which is racial reconciliation).

For this purpose, the Apostle Paul gives us a short teaching to consider when addressing marriage between a believer and unbeliever (I Cor. 7:12-15). In short, his response is, “If the unbeliever is willing to stay married to a Christian, the Christian should stay in the marriage and sanctify the home.” So I believe one question Christians can ask in this healthy dialog is: If we believe our President is leading the country outside of God’s will, and he or she—Christian or not—is willing to continue in relationship with us, how can we as Christians ask for God’s help to sanctify the situation and live in peace? By asking this question, we take ownership of our responsibility and we surrender the situation back to God.

Additionally, we are called to honor those God tells us to honor—not because we like them or because we feel like it—but rather because God expects it of us. He empowers us to respond in obedience in this way, and our credible witness is a testament to our faith. (Pastor Andy Stanley was an excellent example of this during the recent inauguration ceremonies.) We sin when we disgrace the President in our hearts and with our lips!

But we have a unique historical situation with our current president because he is the first African American President of the United States. On the radio, I made the statement that I have never seen the level of disrespect towards any president as I have seen towards this one. (That is not to say that none of our other presidents have been publicly disliked or disrespected—we have approval ratings for this very purpose.) I am not talking about whether or not people agree or disagree with the President’s public policy or the decisions that impact all of us as civilians of this nation.

Most of the time, my concern as a Christian and an African American woman is not with people’s positions concerning President Obama, but with the disrespectful language that is used to articulate those positions, and the choice of language at times sounds racially charged (which concerns me all the more when the language is coming from the mouths of professing Christians). The Bible tells us that a man speaks from what is in his heart (Luke 6:45). While there are appropriate times for righteous anger, God tells us not to sin in our anger (Eph. 4:26).

I am sharing this perspective because the disrespect of our President is an ongoing conversation among African Americans, and I personally know African Americans who have cast their ballots not “for” President Obama, but rather “against” the Republican Party for this very reason. I’m only agreeing with and echoing what General Colin Powell recently communicated in this very interesting exchange on Fox News:

Politics and the Church

I want to close by acknowledging my belief that the modern American Church has an unhealthy relationship with politics, and this is not unique to our culture. Throughout church history there are blatant examples of Christian leaders getting off track and their church members following suit because of an unhealthy relationship with political authorities and the powers that be in this world. I share the concern of Edward Gilbreath who wrote, “What scares me most is when Christians become so zealous about their conservative politics that they bring it into their understanding of what it means to be a faithful follower of Christ (Reconciliation Blues, 139).”

Every election season I hear the statement, “Vote your biblical values,” as if to say, “One political party stands on biblical values and the other does not. If you vote for the other party, you are not a real Christian.” Here’s the problem, real Christians are voting on both sides because the right question is not, “Are you voting biblical values,” but rather, “Which biblical values are you prioritizing and why?” This is actually a conversation Christians on both sides need to have and we can all benefit if we care enough to humble ourselves before the Lord, submit ourselves to one another out of reverence for Christ, and listen to our brothers and sisters who may not share our conclusions. As Christians, we are not political enemies!

One caller shared her perspective (and I am paraphrasing from my notes) that some Black Churches invite political candidates to speak to their congregations, and white churches would never do that. I have experienced Black Churches that have done this. While I have not experienced political candidates speaking to white congregations, I have received handouts in white congregations for several years around election season noting the voting positions of the political candidates and their perspective parties. The message is always the same and it rings loud and clear, “Vote Republican because that’s the Christian choice.” My opinion is that both of these are incorrect practices and have no place in our Sunday morning worship experiences. If Christians have questions and want counsel to gain a better understanding of the political issues, then a public forum of well-informed Christian leaders is warranted at a different time.

For me, the big question here is one I discussed with Pastor Howard-John Wesley Part 1 and Part II during our racial reconciliation series: How do we live our faith in a pluralistic society? We don’t see Jesus or his disciples imposing, manipulating, demanding or seeking political assistance to convert people either in faith or moral practice. When we observe the radical push for Christianity to become a “state religion” throughout church history, the results have been disastrous. The faith that God accepts is from a pure heart. When we truly live as people of faith in the midst of those still living in darkness, it shows them a different way of living. It is the way of love and God’s loving kindness and the power of his Holy Spirit is what truly draws people to change. This is the gospel and the way of the cross. As the American Church, we have to lay down the idol of politics and commit to fully living as people of God. This is how we change the world.

I will share final thoughts from the radio broadcast next Friday.

NOTICE: I welcome open dialog here. Readers are guests to A Sista’s Journey where I am the host. Therefore, I expect my guests to respect each other. You might want to reference my Comment Policy. Listen to each other. While this political piece is important to understand, I will not allow dogmatic political positions to distract from the main topic of this discussion. Rather I want the political perceptions to inform the bigger picture of why our political views cause such division among difference races and ethnicities in the American Church and how we can overcome this great divide?

2 thoughts on “Why Pursue Racial Reconciliation? Part 2: The Politics in It All”