I am continuing the Justice Chronicles with Blake Mankin. Welcome Blake to the blog!

If you were to travel to there today, you would quickly notice how difficult it is for people to get clean water to drink. For many communities, water sources can be miles away, and even then–they’re often contaminated. After decades of war, still the most dangerous reality plaguing the people of South Sudan is a lack of adequate sanitation.

Can you imagine that being a reality in your own context?

Imagine being unable to turn on a faucet without questioning if the subsequent liquid is diseased. Imagine having to walk hours each day to a far-away pond, using what you find to cook, clean, and drink. It would be difficult, to say the least.

In this country roughly the size of Texas, about half the population lacks access to safe water. But statistics only go so far in painting a realistic picture of what’s going on. To gain a fuller understanding, we have to get to know some of the people behind the numbers. 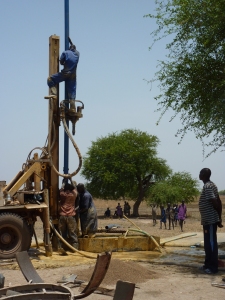 Recently, a team from Every Village was in South Sudan and visited a community called Wulit the same day drillers hit water. The chief told the team it was the first time the village had a water well in its entire history. Can you believe it? This village never had a reliable, safe place to collect water before this well came along. Previously, they had to quench their thirst by gathering water from hand-dug wells that often contained dangerous bacteria.

This community shows us the horror of life without clean water, but more importantly–the hope that springs forth when a when a well is drilled. As the chief described what clean water meant to his people, he started to tear up. It means kids can get an education.  It means women don’t have to spend hours walking to get something to drink. It means transformation.

The daunting nature of the water crisis in South Sudan can seem overwhelming. But stories like the one in Wulit remind us that it isn’t hopeless, that we can make a difference. In our lifetime, we can see every man, woman, and child in South Sudan with access to clean water.

A mission this audacious can act as both a rallying cry and a temptation, however. If we operate under the assumption that we are the solution to South Sudan’s problems, we may inadvertently view the South Sudanese people as a project to be accomplished rather than relationships to be formed and people to be equipped. The fight against the water crisis will not be won by charities that think coming in to solve the problem and then hitting the road will actually solve the problem. No, it will be solved by the South Sudanese people and charities that see themselves as a medium for empowerment through relationship.

Water wells in South Sudanese communities serve as more than just a way to get something to drink. They’re a communal gathering point, a place where ideas are exchanged and relationships are built. In fact, churches are often relocated or planted next to water wells.

Solving the water crisis isn’t just about drilling wells. It’s about learning from the South Sudanese, following their example and living in community. It’s about truly seeing the South Sudanese as the solution to their problems, coming alongside them and helping identify the assets communities already possess. Sustainability is only possible if communities are able to be given the dignity to participate in the development and maintenance of the solution to the water crisis.

So what does this mean for the person wanting to support the movement to provide clean and safe water to every person in South Sudan? What if you can’t move to South Sudan and develop relationships with South Sudanese friends?

It means choosing to support organizations that are leading with their hearts and supporting their love for the South Sudanese people with programs. It means giving financially to organizations and people that are working themselves out of a job, strategically planning to hand off the reigns to community leaders. It means praying for an end to this injustice while also thanking God for the beautiful work he’s accomplished in making the South Sudanese people.

We can see an end to South Sudan’s water crisis in our lifetime. We can see stories flood from the country like the story of Wulit. But we must do it together.

Question: Are there instances when the long-term scope of relationship-building in international aid should be surpassed for a more short-term, solve-the-issue-now approach? What are they?

Blake leads advocacy for Every Village (http://www.everyvillage.org), a nonprofit Christian organization pursuing transformation in South Sudan by the spread of the gospel and community development. He and his wife, Meagan, live in Houston, TX. You can follow more of his musings at his blog, http://www.seeinginvisible.com, and find him on Twitter at http://www.twitter.com/blakemankin.